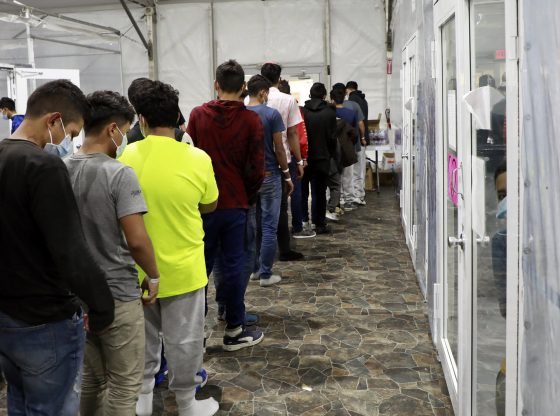 NEW YORK — President Joe Biden is the root cause of today’s COVID-19 superspreader extravaganza on the southern frontier. His come-and-get-it, no-borders policy offers a laurel and hearty welcome to COVID-infected illegal aliens. Biden’s red carpet for COVID carriers on the US-Mexico boundary — atop his mandatory vaccines for U.S. military personnel and vaccination papers for lawful foreign visitors — epitomizes hypocrisy, reckless endangerment, and quite likely negligent homicide.

Mayor Javier Villalobos (R – McAllen, Texas) issued a Declaration of Local Disaster on Monday. According to a municipal-government statement published Wednesday: “Since mid-February of 2021, there have been over 7,000 confirmed COVID-19 positive immigrants released into the city of McAllen by CBP [Customs and Border Protection], including over 1,500 new cases in the past seven days.”

Also, 135 illegals in CBP’s Rio Grande Valley sector tested positive for COVID-19 in July’s first half, up 900 percent versus the previous 14 months.

Patrons at a Whataburger restaurant in La Joya, Texas, fretted on July 26 when several other diners coughed, sneezed, and failed to wear masks. According to police, these migrants said they were caught by the Border Patrol, released, and tested positive for COVID.

“No one told the police department that these people were here,” La Joya Police Sergeant Manuel Casas complained. These and other illegals were guests of Catholic Charities of The Rio Grande Valley and were housed at La Joya’s Texas Inn & Suites. Sergeant Casas told Fox News: “The information we have is that everyone that is staying in that hotel is COVID-19 positive because it’s being rented out for them.”

Border Patrol union leader Chris Cabrera said July 31 on Cavuto Live: “We are releasing people out the door — day in, day out — with actual positive tests for COVID, and more just keep popping up.”

Catholic Charities and other private outfits largely conduct COVID tests on illegals, such as they occur.

Statistics confirm that COVID is more common and less inoculated against in countries whose people are busiest busting through the border.

–In America, as of Friday, there were 30 new C-19 infections reported daily per 100,000 people. Among the top-five nations whose citizens the Border Patrol has encountered since October:

–Reuters reports that 50.3 percent of Americans are fully vaccinated against COVID. Elsewhere?

What about the other eight of 10 top nationalities encountered at the US-Mexico border? Our World in Data, associated with Oxford University, lacks such current information.

Social distancing is a distant memory for today’s invading army of illegal aliens. They are being stacked in stash houses, packed in tractor trailers, and backed into federal facilities, sometimes at 600 percent of capacity.

COVID-positive illegals rarely are quarantined. Instead, they enjoy taxpayer-funded bus and airplane rides to cities across America. They reach their destinations after Team Biden neither asks permission of nor even notifies relevant state and local officials.

Stopping the spread of COVID-19 takes a far-back seat to Biden’s No. 1 priority: Inviting as many Future Democrats of America to breach the border and, later or sooner, vote for Left-wing candidates and causes.

“This is a guy who ran for president saying he was going to shut down the virus,” Governor Ron DeSantis (R – Florida) said Wednesday. “And what has he done? He’s imported more virus from around the world by having a wide open southern border.”

“Why don’t you do your job?” DeSantis demanded of Biden. “Why don’t you get this border secure? And until you do that, I don’t wanna hear a blip about COVID from you.”

COVID-19 is an invisible foreign enemy at war with America. Joe Biden’s superspreader border policies are giving this deadly virus aid and comfort.

The President of the United States is guilty of bio-treason.

Deroy Murdock is a Manhattan-based Fox News Contributor, a contributing editor with National Review Online, and a senior fellow with the London Center for Policy Research. Bucknell University’s Michael Malarkey contributed research to this opinion piece.

Joe Biden is certainly finishing the job our grandfathers and fathers stated back in the 1920s to destroy America.
The first steps towards our destruction that I am aware of was allowing the universities to teach evolution over creation, and then I believe it was in the early 1960s allowing pornography to be published and sold throughout the United States, then the removal of prayer from all our schools, then came the homosexuality, same-sex marriages, transgenderism, and the removal of the Ten Commandments from our schools and court rooms; thus, Joe has had a lot of help in destroying the United States.

I do not like using the word “fool” but in this case that is the best word to use; many a fool has said God will not allow the destruction of America, they may think they know God and His love for this nation, and I will admit God loves this nation and He has made this nation great, and He knew we would be Israel’s worldly protector even many centuries before our nation existed.
However, this nation and many within her have worked furiously to kick God out of every aspect of this government, out of their workplaces, and out of their daily lives, and they have succeeded in virtually all their efforts.

God will save the individuals who have accepted Yeshua, the Christ as their LORD and Savior, but God will allow the destruction of the United States, and she will never rise again.
Hence, this nation is perched on the edge of the abyss, for how long, only God’s knows, but for a certainty it will happen approximately seven short years before the gathering of all the world’s armies on the Plains of Megiddo for the greats of all Battles, Armageddon.

[…] Here you can find 24363 more Info on that Topic: thehollywoodconservative.us/articles/biden-rolls-out-red-carpet-for-covid-infected-illegal-aliens/ […]

[…] Information to that Topic: thehollywoodconservative.us/articles/biden-rolls-out-red-carpet-for-covid-infected-illegal-aliens/ […]

[…] There you will find 3329 more Information on that Topic: thehollywoodconservative.us/articles/biden-rolls-out-red-carpet-for-covid-infected-illegal-aliens/ […]