On Tuesday, the Joe Biden regime announced its new “war on terror” in the form of new agenda items, which are targeting specific sectors of the population.

According to PJ Media:

In the “National Strategy for Countering Domestic Terrorism,” the Biden White House pledges that the administration will combat domestic terrorism “while vigilantly safeguarding peaceful expression of a wide range of views and freedom of political association.” Yet the administration’s biases give conservatives good reason to doubt this pledge.

In other sections of the document, the Biden regime outlines specific groups it is looking to target, namely extremist domestic terrorist groups like the Ku Klux Klan, claiming “in recent years, we have seen a resurgence of this and related threats in one horrific incident after another.”

The document mentions the Dallas shooter, who appears to have been inspired by the Black Lives Matter movement to assassinate police officers he assumed were white, but it describes this shooter as “an anti-authority violent extremist.” Similarly, it mentions the congressional baseball game shooting in 2017, in which a leftist terrorist attempted to assassinate Republican members of Congress, but the document describes the shooter as “a lone gunman.”

It seems particularly curious that Biden describes white racism and militias as the key terror threats while ignoring the underlying motives of the Pulse Nightclub shooting, the Dallas shooting, and the attempted assassination of Republican congressmen.

Although the document appears fairly benign, it opens the door for targeting specific groups, such as white supremacists, but it does not mention other hate groups, such as Antifa and Black Lives Matter.

Going after the Black panther party? The NFAC? Doubt it you spineless nothing.

Black Lives Matter and ANTIFA are Marxist led TERRORISTS—that in 2020 alone did over Two Billion Dollars in property damages—Where is the current Justice Department and F.B.I. when it come to dealing with these “friends” of the Dems?

Fact for liberal lunatics like Biden is anyone not buying their crap is their enemy. That would be all 75 million voters who know the dim wits stole the election. And the facts are coming to light! Civil war if they keep shoving their lies and BS in our faces. Enough is enough.

When We are “allowed a re-count” and audit of the 2020 STEAL, We can have America come back to life again and deal with the conspirators as the REAL TERRORISTS—OPENING THE BORDER—QUASHING ENERGY!

One more reason for red-states to secede…this libturd loser-clown the Deep-State installed in the WH, just can’t help himself!

Interesting. Noine of the strategy is designed to address Antifa or BLM but is designred to accuse victims of Antifa or BLM as being terrorists should they defend themselves
Have there ever been more amazing perversion of American law. Doubtless these actions are designed to foment uprising that will permit Biden to declare Martial law and arest all conservative leadership.

Yeah. Ha ha! Sooner or later he will come after garden-variety Republicans who oppose Critical Race Theory and other Marxist drivel.

White Supremists are just a newer version of the KKK, them there is the anti American groups who call them selves militias, which according to most state laws Militia’s are illegal if they train in a military way. Those militias called for in the Constitution are all ready under state control we call them the State National Guard, so the 2nd Amendment part bout the militias if fully fulfilled.
Whites throughout history have been the an aggressive group of persons, trying to hold back anyone except whites, and actually preformed a type of genocide on the American Indians, in the quest to take over this what is now the USA. If this country is to survive then we need actual mutual cooperation, among the people not the constant infighting and constant agitation from groups who do not like how the Constitution says this USA is suppose to operate.

The most interesting part of this is Biden is incapable of putting that many words together at any given time. The disdain this traitor has for the American people is amazing. He will make a charter member of the CCP proud!

I doubt the democrats will seriously target the KKK as it is a democrat organization. And they will not confront violent BLM and ANTIFA thugs who riot, commit arson, loot, and assault police and conservative citizens, as domestic terrorists

Sure. Just so long as said “terrorists” are on the right side of the fence.

We must make a T-shirt ” Who killed Ashli Babbitt?” and watch the Marxists run for cover.
Make it I’ll buy it and wear it.
Profits go to her family’s effort for justice.

Just another way to get rid of opposition.

What Biden means is that he will sick DOJ and FBI on citizens that do not agree with him. Sounds like a Hitler like dictator to me but he has an excuse..he is nuts!

Biden and democrats have declared war on us. WHY AREN’T WE STACKING BODIES? 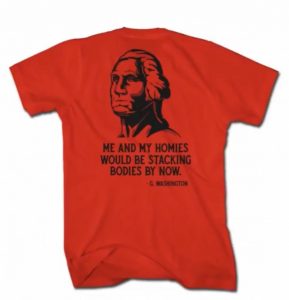 BLM is going to be CZAR of the Dometrical violets

[…] Find More on on that Topic: thehollywoodconservative.us/articles/biden-reveals-domestic-terror-agenda-targeting-anti-government-extremists/ […]

[…] Read More on to that Topic: thehollywoodconservative.us/articles/biden-reveals-domestic-terror-agenda-targeting-anti-government-extremists/ […]

[…] Read More on that Topic: thehollywoodconservative.us/articles/biden-reveals-domestic-terror-agenda-targeting-anti-government-extremists/ […]