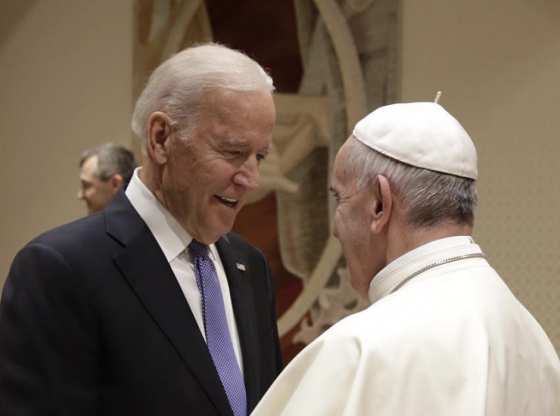 Pope @franciscus embodies our collective obligation to give meaning to the universal principles that cut across all great religions: That faith is a gift revealed not just in what we believe, but also in what we do together. It was a pleasure to see him again in the Vatican today. Via Wikimedia Commons.
News |

According to Joe Biden, he claims his Friday meeting with Pope Francis at the Vatican included the supreme pontiff telling the pro-abortion politician that he’s a ‘good Catholic” and to continue receiving Communion.

Biden said that Francis told him that he should keep receiving communion. The president said the pope blessed his rosary, and added that they discussed fighting climate change as part of his Build Back Better agenda.

“We just talked about the fact that he was happy I’m a good Catholic,” Biden said. “And I should keep receiving communion.”

Biden said that the pope did not give him communion during the meeting.

During the meeting, Biden gave Pope Francis a “challenge coin,” saying, “I’m not sure this is appropriate, but there is a tradition in America that the president, that he gives to warriors and leaders. You are the most significant warrior for peace I’ve ever met, and I’d like to be able to give you a coin.”

Biden claims the pope pooped his pants and blamed it on him. Take the blame or no communion.

If he doesn’t accept Jesus Christ as his Savior, per the Bible, the answer is “Yes”.

I just know if I make a comment about this I will have the FBI, CIA, NSA, DOJ, DOD, GSA and half a dozen other DC alphabet soup organizations breathing down my neck so I won’t say anything. :p

Don’t forget about the criminals at the irs, too.

What would happen if every American decided not to pay the IRS? It would have to be a joint effort though!

Well,you know,all of these corrupt(alphabet) agencies have to earn their keep? And let’s not forget,we are paying for these clowns!!

Well you could get the advice of Comey. He LIED to Congress FOUR times and now under the Biden administration and a Lefty judge got his pension back. He should have been sent to the joint just to discourage future FBI future liars.

What the Pope may have told Biden doesn’t matter. If Biden is a “good Catholic”, as he claims, he knows that he is guilty of the sin of scandal as long as he continues to claim to be a devote Catholic but remains a vocal supporter of abortion, including forcing Christians to pay for it.

Beijing Biden is a lying fool, and NO Catholic. Bergoglio is no better; they both give US, the REAL Catholics of the world, heartburn! We are sick to death of their evil lies!

What good can you ever expect from Biden, a liar and cheat, with the morals of a roach & the Pope, the so-called head of the Catholic Church who is a spineless sob who will never be a true servant of God!!!

We all know what a liar, scum bag Biden is. Who cares if he pooped his britches. Everyone knows that in order to receive communion per the Bible you must accept that Jesus is your savior and that God is your heavenly father. You must confess it with your mouth and live as per the 10 commandments. Live as Jesus did as best as possible. Repent of your sins and love God with your whole heart, your strength and your body. Jesus is God made as a man to help us to have salvation. Biden needs our prayers that he will have his heart cleansed by God. If he’s a good catholic, I must be a saint……NOT!!!!!

I would love to find out if this true? More than likely,this Pope will remain silent?

I do not believe the Pope said this. When asked he answered with the Papal equivalent of no comment. It is only Biden claiming the Pope said this. There has been no Papal confirmation. And I do not like this Commie Pope. If you believe ANYTHING BIDEN SAYS then I got a Bridge in Brooklyn I got for sale – a real antique no less; or how about a beach front home in Arizona – the sand is real hot, – or an Alpine Chalet in The Florida Everglades – neighbors are real snappy but some of them put the squeeze on you.

I made two comments one about Mendacious Biden and his statements attributed to the Pope whom I don’t like and another about FBI Comey the Phoney. Now they await approval?

Looks like this site is as selective of free speech participants as the Big Tech a-holes.

What Are Essential Oils and Do They Work?

[…] Here you can find 13773 more Info on that Topic: thehollywoodconservative.us/articles/biden-claims-pope-told-him-hes-a-good-catholic-to-keep-receiving-communion/ […]

[…] Information to that Topic: thehollywoodconservative.us/articles/biden-claims-pope-told-him-hes-a-good-catholic-to-keep-receiving-communion/ […]

[…] There you can find 19409 additional Information on that Topic: thehollywoodconservative.us/articles/biden-claims-pope-told-him-hes-a-good-catholic-to-keep-receiving-communion/ […]