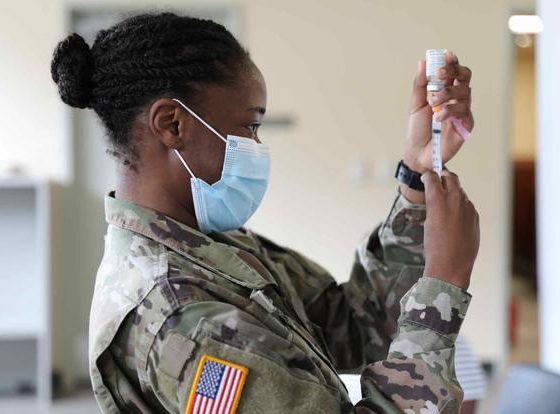 The Army is the only remaining military branch yet to discharge anyone for failing to get the Covid-19 vaccine but that’s about to change. Army Secretary Christine Wormuth said, “effective immediately, commanders will initiate involuntary administrative separation proceedings for Soldiers who have refused the lawful order to be vaccinated against COVID-19 and who do not have a pending or approved exemption request.”

Soldiers can apply for religious or medical exemptions, though approval isn’t guaranteed. In other cases, soldiers who plan on leaving the Army or begin transitioning by July 1 can seek a temporary exemption that would allow them to remain unvaccinated until their departure.

“Army readiness depends on Soldiers who are prepared to train, deploy, fight and win our nation’s wars,” Wormuth said. “Unvaccinated Soldiers present risk to the force and jeopardize readiness. We will begin involuntary separation proceedings for Soldiers who refuse the vaccine order and are not pending a final decision on an exemption.”

For the soldiers who eventually get separated over their refusal, they will be discharged under honorable or general conditions unless there is unrelated detrimental conduct to consider, as a result of a provision included in the 2022 National Defense Authorization Act, which President Joe Biden recently signed into law.

The scum who run our country are ruining
Our military. Period

Yep. If this is not grounds for impeachment proceedings against their Fraudster-in-Chief then nothing is.

The Chinks are licking their chops…

Nothing like forcibly downsizing our Army while creating a crisis with Russia and letting China run rampant over Hong Kong and Taiwan. I’m starting to believe these idiot leftist really are trying to bring the USA down one way or another. If a republican takes the presidency in 2024, I hope he fires all the Joint Chiefs and replaces them with patriots!

When your commander-in-chief is a goddamned POS-mfkr, why the hell, would you want to serve❓And, who “exactly” are you serving…the, whole chain-of-command, is corrupt & tainted.