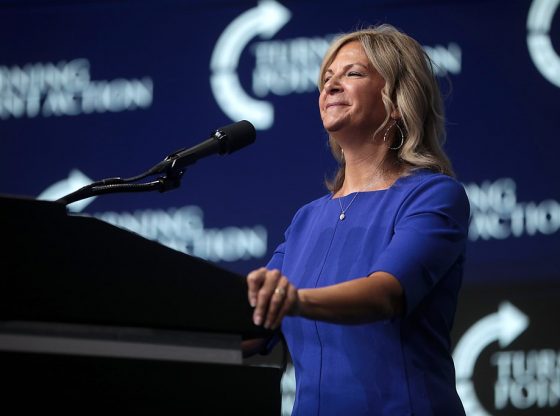 Last week, the House panel issued subpoenas to 14 individuals who sought to submit a slate of fake electors who “certified” that former President Trump actually won states that had gone to Joe Biden during the 2020 election.

Key Details: Neither Kelly Ward nor her husband, were among the group listed by the select committee last week. However, they were both among the fake electors who tried to pass off their certifications as legitimate Electoral College votes for Trump.

What Happened: Ward and her husband, who owns a medical practice, filed a lawsuit with Arizona’s federal district court arguing the House panel’s subpoena would violate their constitutional rights and their patients’ confidentiality.

“Plaintiffs respectfully ask that this Court declare that the Subpoena is a violation of the Plaintiffs’ constitutional rights, an overbroad overreach of congressional power for improper purposes, and that this Court quash it, while enjoining Defendants from enforcing the Subpoena or producing any documents in compliance with its demands,” the lawsuit reads.

What Came Next: The Wards’ lawsuit was initially assigned to U.S. District Judge Susan Brnovich, who is married to Arizona Attorney General Mark Brnovich (R), a Trump ally running for Senate. The judge quickly recused herself a day after the lawsuit was filed. (per The Hill)

Democrats in Congress are carrying on an improper investigation and unethically preventing Republicans from representation.

The whole witch hunt is just another boondoggle and waste of taxpayer time and money and should be illegal for them to harass people when the leader, Pelosi is responsible for everything that happened. She was in charge of security and failed in every way spectacularly. But then the evidence thus far indicates she set it all up. And still US citizens are illegally detained and harmed because of her devious deceptions. Seems like Old Nanc is the one who should be in Jail and being charged!

Duplicate of the Russia investigation. Just BS so the woke news can report Dem talking points to brain wash the stupid citizenry amongst us into make believe that January 6th was some huge GOP rebellion against the government, and Trump was the leader. ……. F them.

Republicans need to demand that Pelosi’s emails and phone records be subpoena since she was in charge of security for Congress and she turned down offers by Trump for additional security days before the “riot” took place. We need to know why and what did she say and do leading up to the riot.

To all the liberal whine bags, you believed a democrats campaign promises, when all past election promises by democrats have been written in water. After winning the election, they ignore their voters until the next election. Several rinos do the same.

The US Democrat partisan subterfuge is starting to look like Romanian President Nicolae Ceaușescu”s regime in Romania. Romanians had to take a revolution and their version of the 2nd amendment option to clean the criminals out of office – 1st executed were President Ceaușescu and his wife.
Evewryone got fair trials and were shot or imprisoned

Democrats are using tax dollars to attack the Republicans. This needs to stop.

This committee is getting totally out of hand!!! Start with the videos old Piglosi is hiding as she does not want
anyone to see them as all blame would point to her first off. From the doors being unlocked from inside and
them being invited in by Capitol Police!!! Also she was fore warned to just for safety call in the N/G for good
measure ….and SHE ignored it because she wanted to blame any Trump supporters that may be present and
conservative bystanders. And the way the people in the jail are being treated is enough to boil anyone’s blood!! She has set her group to have ultimate power over everyone!!! This has been a set up from the beginning!! They ONLY WANT SOMETHING, ANYTHING, NO MATTER IF ITS TRUE OR NOT. …..TO STOP
TRUMP FROM BEING ABLE TO RUN FOR PRESIDENT!!!! They know if he does their goose is COOKED!!
And she can not stand it!!!!!!

The actors, good or bad, decent or indecent, honest or duplicitous, are being held as political prisoners in an American GULAG. This action, no habeas corpus, no trial, no visitors, is unworthy of our Great American Republic. The instigators and enforcers of this outrage without judicial process deserve similar treatment, and yes, this includes Nasty Pelovski, Hero of the Soviet Union.

They’ll continue doing these one-sided investigations as long as Conservatives/Republicans do nothing to counteract! How has our side become so lazy that we don’t fight back? Write, call to these politicians until they feel the pressure!!

So the judge recused herself, Now a Democrstic judge will allow the sopoenas to stand.

PELOSI, Refused to have the National Guard deployed around the Capitol even after President Trump asked for them. She refused , Why. Did she know there were Democratic paid instigators and FBI undercover instigators within the group of protesters, And wanted to blow this peaceful assembly up and then blame Trump. They have been trying to bring him down since before day one of his Presidency. They are scared and have so much HATE for a person who could not be bought by the DC corrupt and that he had threatened to drain the Washington DC SWAMP. Well the Gators are still there along with all the snakes. So come on all educated citizens wake up vote to protect this country and its constitution for future generations your children and grandchildren.