Radical left-wing congresswoman Alexandria Ocasio-Cortez claimed that the events of January 6th, 2021 were merely a ‘trial run’ for conservatives and that ‘they…are going to come back.’

Far-Left Rep. Alexandria Ocasio-Cortez (D-NY) warned her supporters Wednesday that the January 6 Capitol riot was “a trial run,” adding ominously that “they” are “going to come back.”

The leader of the so-called “Squad” of socialist House Democrats, who holed up in her office during the rioting and later claimed the mob left her in fear for her life, made the claim at a town hall meeting for constituents.

“This is no joke,” AOC said, according to Yahoo! News. “Jan. 6 was a trial run, and a lot of people don’t seem to understand that. It was a trial run.”

“They’re going to come back,” she added, without giving any details into the offered conspiracy.

AOC had previously commented that during the riot she fully believed that she was going to be killed by the trespassers.

Once a barmaid, always a barmaid. She proves once again, you can’t make silk out of a sows ear. 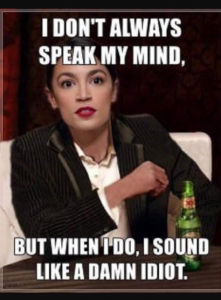