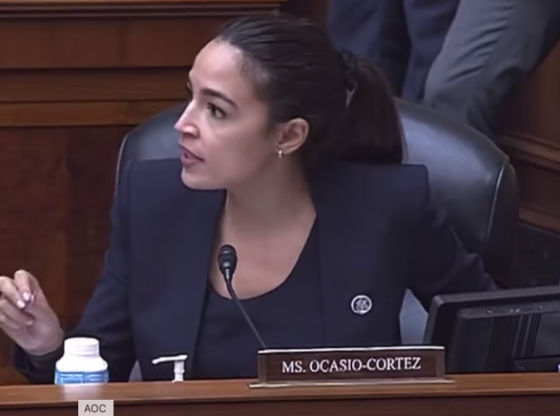 Screenshot via the U.S. House of Representatives.
News |

“In the four years that I’ve sat on this committee, I have never seen members of Congress, Republican or Democrat, disrespect a witness in the way that I have seen them disrespect you today,” AOC pontificated. “I do not care what party they are in. I’ve never seen anything like that.”

“And for the gentleman of Louisiana, and the comfort that he felt in yelling at you like that,” AOC claimed, “there’s more than one way to get a point across.”

“And, frankly, men who treat women like that in public, I fear how they treat them in private,” she concluded. “We can be better than this. We don’t have to resort to yelling.”

A review of the exchange between Higgins and Salter shows that Salter was louder toward Higgins than he was to her as he repeatedly tried to get her to answer the questions he was asking.

"Men who treat women like that in public, I fear how they treat them in private. We can be better than this." pic.twitter.com/tZfTKoI29p

Here's the heated exchange between Rep. Clay Higgins (R-LA) and Raya Salter, who is executive director of the Energy Justice Law and Policy Center.

The bar slut is always doing something to draw attention to herself. She’s an idiot.

She’s worse than an idiot, Gerald. She is a narcissistic manipulator.

Salter had no answers regarding alternatives to existing transportation of material, plants, lower animals and people by air and sea. Without oil, gas, coal and possibly even wood, she probably wouldn’t have been there. Knowledge and experience in the subject industry has totally escaped her.

Apparently, she believes batteries, solar panels or sun-boiled steam mechanisms are able to drive ships and planes. Higgins simply babbled the leftist propaganda after being offered time to explain her position. And by the way, Higgins never yelled while she screeched off-topic melodrama.

Correction: In the second paragraph, change Higgins to Salter.

AOC is an idiot who should still be tending bar somewhere.