Her demand comes as Democrats have been criticizing Justice Thomas for not recusing himself from cases related to the Jan. 6 Capitol riot after it was revealed that his wife sent texts to then-White House chief of staff Mark Meadows pushing him to challenge the 2020 election results.

“Clarence Thomas should resign,” Ocasio-Cortez tweeted Tuesday morning. “If not, his failure to disclose income from right-wing organizations, recuse himself from matters involving his wife, and his vote to block the Jan 6th commission from key information must be investigated and could serve as grounds for impeachment.”

House and Senate Democrats on Monday sent a letter to Thomas and Chief Justice John Roberts regarding “alarming new reports about Justice Thomas’s potential conflicts of interest” related to his wife. They claimed there is an “urgent need for significant ethics reform at the Supreme Court.”

They cited a federal statute that calls upon judges and justices to recuse from “any proceeding in which his impartiality might reasonably be questioned,” and slammed him for remaining involved in cases related to the 2020 election and the Jan. 6 riot, despite his wife’s reported involvement with efforts to overturn the election’s results.

House Minority Leader Kevin McCarthy has defended Justice Thomas and said it will be his decision and nobody else’s if he steps down from the bench.

“It’s his decision based upon law. If you spent any time studying the Supreme Court justice, he’s one who studies correctly, and I mean, from all the way through. If he sees it’s not upholding the Constitution, he’ll rule against it.”

AOC marks the fifth House Democrat to call on Thomas to resign. 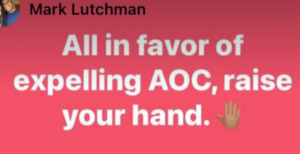 That Ginsburg was sick for years and there was not one peep. I have to wonder if AOC has any competition in her November election . Only way to shut her idiocy up is to defeat her at the ballot box. Sick, twisted, biased little bee.