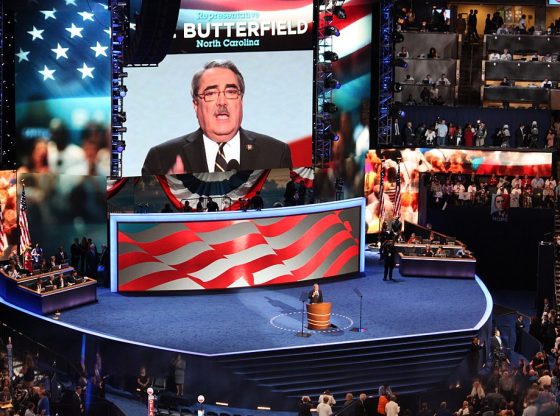 Another Democrat is bowing out of politics. On Thursday, North Carolina Democrat Rep. G.K. Butterfield announced he’s retiring ahead of next year’s 2022 midterms.

“It is time for me to retire and allow the torch to be passed to someone who shares the values of the district and can continue the work I have labored so hard for the past 18 years,” Butterfield announced in a video posted to his official YouTube channel.

“I am proud of my work in Congress on behalf of my constituents, and I know that my life’s work of fighting for greater fairness and equity will not cease, even after the close of the 117th Congress,” Butterfield added.

Butterfield was elected to the House of Representatives in a special election in 2004, representing North Carolina’s 1st Congressional District. He is the Senior Chief Deputy Whip of the House Democratic Caucus, appointed this year to replace the late Congressman John Lewis. He currently serves on the House Energy & Commerce and Administration Committees. He also served stints on the House Armed Services, Agriculture, and Ethics Committees. Notably, he served as the chairman of the Congressional Black Caucus from 2015 to 2017.

Before he made the announcement officially, there was significant speculation from local news outlets that Butterfield was considering retirement. Butterfield was used to winning his district by comfortable margins, but because of redistricting, his race has become a toss-up, since a smaller share of the black voters who propelled him to those margins will be included in the redrawn district. “While I am hopeful that the courts will ultimately overturn this partisan map and see that a fair map is enacted, I have made the difficult decision that I will not seek reelection to the United States House of Representatives,” Butterfield said in his retirement announcement.

Will Republicans manage to flip Butterfield’s district in next year’s elections? Tell us what you think in the comments below!

I don’t see how any Democrat can say they served on an Ethics committee, That must be one of the largest fallacies ever stated. This is like saying the title Democrat does not end with the word RAT.

Oh, you are so right.

Tip O’Neal said all politics are local. Whoever understands that best will win. I think CRT is going to be a millstone around all democrats necks.

Yes Republicans will flip Butterfield’ seat and ALL OTHER DEMOCRATS WILL BE FLIPPED, OVERTHROWN BY THE VENGEANCE OF ALMIGHTY GOD. SWIFTLY. The Bible SAYS, “O LORD, THE GOD TO Whom VENGEANCE Belongs. O GOD Of VENGEANCE, Let YOUR GLORIOUS JUSTICE BE SEEN. Arise, O JUDGE OF THE EARTH. Sentence The Proud To The Penalties They DESERVE. ” (Psalm 94) These WORDS of GOD Are Decreed And Released throughout The DncDemocrats, Biden-Harris Pelosi Obama Soros Rice Schumer Schiff Sullivan Blinken Milley Austin AG Garland, Mayorgas-Regime, globalists, Facebook-Mark, Twitter-Jack And EVERYONE WHO’S CONNECTED-PARTNERED. “THE LORD HAS MADE THE HEAVENS HIS THRONE; FROM THERE GOD RULES OVER EVERYTHING” (Psalm 103) IF GOD IS FOR US HE IS MORE THAN THE WORLD AGAINST US” I Decree in JESUS NAME 🔥

They’ll be a lot more of them to come. They all know the red waves are catching up to them and it’s a matter of time before they’ll wish they could get away……,,,

globalist puppet $oro$ knows that all he needs to do is use more voter fraud than there are American voters and appoint/reappoint his globalist puppets; demonrats and rinos .

He’s retiring to avoid the embarrassment of being voted out….

Notice how when it’s a fair fight the DEMOCRATS start to retire?

[…] Information to that Topic: thehollywoodconservative.us/articles/another-house-democrat-announces-retirement/ […]

how to earn money without investment

[…] Information to that Topic: thehollywoodconservative.us/articles/another-house-democrat-announces-retirement/ […]

[…] Read More on that Topic: thehollywoodconservative.us/articles/another-house-democrat-announces-retirement/ […]

[…] Read More on that Topic: thehollywoodconservative.us/articles/another-house-democrat-announces-retirement/ […]

[…] Find More to that Topic: thehollywoodconservative.us/articles/another-house-democrat-announces-retirement/ […]