Far-left Congresswoman AOC has now been hit with several outstanding tax warrants and related fines for allegedly dodging taxes in the state of New York.

The state filed a tax warrant against Brook Avenue Press — a children-oriented publishing house Ocasio-Cortez founded in 2012 — on July 6, 2017, to collect $1,618 in unpaid corporate taxes, the Washington Examiner reported. The tax warrant has increased 52% to cost $2,461 due to the representative not paying the taxes.

New York issues tax warrants if businesses “fail to timely resolve” their debt and do not respond to their notices and will proceed with “further collection action,” according to the New York Department of Taxation and Finance.

The state filed the tax warrant nearly two months after she launched her campaign for the U.S. House of Representatives against former Democratic New York Rep. Joe Crowley, the Examiner reported. A representative for the Bronx County Clerk’s Office told the outlet that the warrant remains open.

AOC has yet to pay a penny of her overdue corporate tax bill. Her tax warrant has swelled to $2,461 as of today.@dcexaminer https://t.co/undrd8b9E2

AOC’s office claimed in response that the warrants were issued ‘in error’ and that the congresswoman is ‘in the process of contesting’ the warrant.

AOC has been vocal about her support for higher tax rates for high earners in the past. 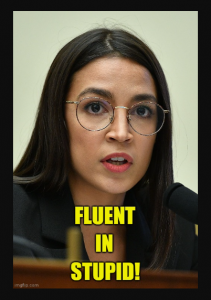 The value of the taxes owed, under the warrant, along with the photo posted by Stephanie Wilson, should be on posters (or billboards) in her district and Washington, DC at strategic locations.
Just overlay in open letters with her moniker “ANOTHER OFFENSIVE COMMUNIST”, aka AOC.

What a fine, upstanding law abiding, tax paying citizen she AIN’T! A hypocrite she definitely is.

Hahaha. This makes me smile. It’s about time that AOC learns to pay her debts. It’s also a good thing if she could get used to the idea of paying off her student loans. It simply isn’t the right thing to do to expect working folks and retired folks to pay for her own financial booboos.

I went to trade school, had $3,000.00 student loan. Paid off in two years. No fancy high priced paper for being stupid. Most college degrees are a scam to give you a warm and fuzzy that you will be paid six figures out of the gate. I know many people with a stack of fancy degrees that can’t wipe their ass right or push a broom. That worthless degree has thousands of others in the same boat trying for that one six figure job. Then it’s given to some kid with connections to the CEO but haven’t a clue of what they are doing. I lost several jobs to less qualified kids because they had daddies’ connections. I figure KARMA would bite them and heard of some it did, it cost them a fortune. Hope no one got killed due to their learning curve.

I have tried to employ some. Most just hurt themselves and the rest can screw up an anvil with a feather. Many can’t figure out which end of a screwdriver to stick up their nose but want to start at big bucks. Bigger pain in the ass then they are worth.

Policestate
Reply to  Pissed Off American

Yeah,, we had an engineer that would not believe us when we told him a particular nut had to be turned to the right to loosen it. He started turning left and then got a cheater pipe, ended up shearing off the end of the shaft. It took 4 months to get the part from China. But he was such a smart fella 24 straight out of college.

String her up; make an example out of her. America can send the message Americans are done with the lying double faced criminals in OUR government. String her up !

WHAT! There must be some mistake! AOC is an elite and is above the law. (Just ask her) Why would they have to pay taxes when they are doing a fine job of destroying America for the benefit of all the criminals, illegals, thieves. elites who want us as slave labor. Like that black woman running for governor in the south that wants to disband all police, release all thugs and erase their records. Who is going to protect her ass, caulk the bodies and write the reports? She wants to collect your guns. Good stuff these people are smoking. Looks like hunting season for thugs is about to open. No time or bag limits. Good hunting!

Policestate
Reply to  Pissed Off American

We already are Slave labour and have been since the introduction of the Dollar Bill and the IRS.

AOC is a useless liberal crack pot shouting her stupidity from the the rooftop. A waste of breath to the masses of idiots she represents.

She fits perfectly in with the rest of commie a-holes in DC .